Song and dance are an important part of life. In Asia, these things are often part of tradition. Cambodia tour packages involve sights and sounds, day and night. During a holiday that offers a comprehensive insight into Cambodia it is likely that song and dance will play a part.

Here are some of the possibilities:

•    Classical Dance originates in the royal court of Angkor. Dances are intended to call on the gods, offering blessings. Today these dances are performed at special events as well as educational theme evenings.

•    Folk Dance belongs to some of the small ethnic groups and dances celebrate or seek a good harvest, or celebrate fishing. Tourists are most likely to see this dancing in rural areas during Cambodia and Vietnam tour. This form of danceis not especially old though it has traditional rural life at its core.

•    Mohaori music was first played during in the royal court centuries ago. It is fairly complex yet delicate. At first it was largely women who played the instruments, anything up to twelve different ones, but today men play as well.

•    Pin Peat music was also the product of the royal court. It involves flute, gong, drums and xylophone among others.

•    The Chapei Dang Weng is a two-stringed, long-neck guitar dating back to 500 BC. Images of the guitar can be seen on the walls of temples in Angkor. Today it features in weddings and other ceremonies. Sometimes there are solo performances though often the guitar is played together with other instruments.

•    Yike Opera tells stories and is performed on occasions such as inaugurating a new temple.

•    SmotPoetry tells of Buddha or Khmer tales with someone regularly ‘’performing’’ at funerals. The words are not in familiar language and therefore are not easily memorised.

•    Sbaek Thom is puppetry and one of the oldest art forms in the country. Its origins are Hindu.

•    Kantoaming music is played at funerals; it is rare and dates back to Buddha’s time. Gong, drum and a reed instrument are used and the aim is to calm the soul as it enters the afterlife.

•    Pleinkar Boran is wedding classical music using flute, strings and percussions (xylophone and drums) with a singer accompanying the musicians.

•    Pleinkar Sakmai is modern wedding music and given weddings last three days and nights, players are quite tired after such a long session because the music will be played throughout the whole time.

•    Lakhaon Bassac is a form of opera with strong influences from immigrant communities, Vietnamese and Chinese. Stories range from Buddhist to even Arab legend.

A Cambodia family tour will be very educational in many ways. Indochina tour packages offer such variety and a good Cambodia travel agency will arrange an itinerary to suit client wishes. The song and dance is not likely to resemble anything that tourists from other than South East Asia will have seen before. There are several different experiences on a holiday in Cambodia with song and dance being one of them. 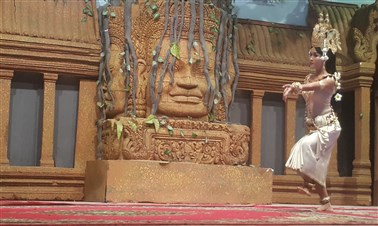 The Lasting Impact of Music & Dance on Cambodian Culture