The Ho Prakeo, a chapel that once held the Emerald Buddha that is now in Bangkok's Grand Palace. Next to the presidential palace, in the grounds of what was once the royal palace, stands the Ho Prakeo, or "Hall of the Emerald Buddha." This building was once the private chapel of the King of Laos, and the only surviving part of the old royal palace.

One of the fanciful "Naga" serpents that guard the stairs to the Ho Prakeo. The chapel was built around 1535 to house the Emerald Buddha image, which was obtained from the Lanna capital of Chiang Mai, along with the Prabang image still housed in the Luang Prabang Royal Palace. The image was housed here for nearly 250 years before Chaopraya Chakri - the future King Rama I - of Siam recaptured the image a took it back to Thailand and the new capital of Bangkok.

In fact, the original Ho Prakeo was almost completely destroyed when the Siamese went to war with Laos again around 1828, and sacked the capital of Vientiane. It was restored with French help in the late 1930s, just before World War II. The bulding is now a museum housing some of Laos' finest examples of Buddhist art.

A standing Buddha image on the rear portico of the Ho Prakeo. Bronze Buddha images line the upper galleries running along either side of the hall. Many of them are missing their top-knots, along with other bits of decoration that were probably looted. A number of stele are propped up around the front portico, while inside are a wide array of images, mostly Buddhist although there are some older Hindu pieces as well.

In the yard in front of the museum is an example of once of the huge stone jars found on the Plain of Jars in northern Laos, although according to those who have been there, this is a rather poor specimen. 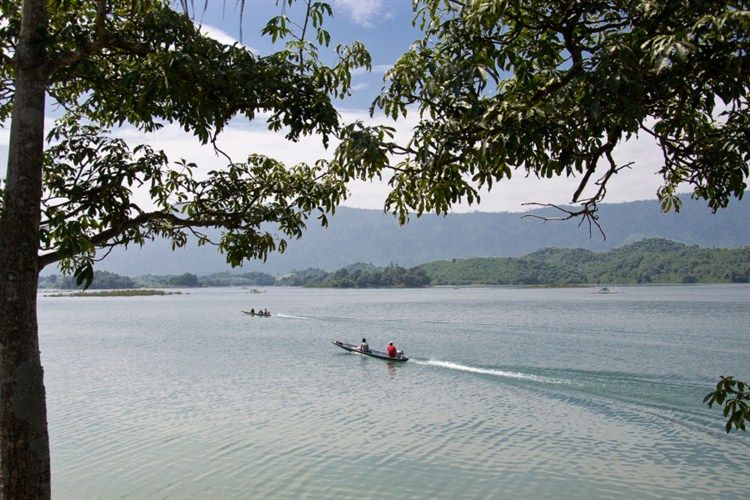