While there are similarities between the different cuisines of South East Asia, there are also several differences, country to country. The produce that chefs have throughout the region and there has been significant movement of people from country to country many dishes traditional to districts have not changed over the years. In Laos, there is huge variety and eating is a special occasion.

Rice and noodles are common of course and Laotians use several techniques in the kitchen; grilling and frying, stewing and steaming. The important thing is fresh ingredients and this is one of the joys of street food bought from busy vendors. There is no time for anything to stand around. Little is refrigerated, certainly not in rural areas; it is straight from the hunt, the water or the field straight into the kitchen and on to the fire. The cuisine is a really important part of any Laos holiday. Wash your hands because it is likely that you may be using them for eating your food.

Here are some of the popular dishes you are almost certain to come across during Laos tour packages:

•    Laos Sticky Rice in a basket has been part of Laos cuisine for thousands of years. You use your hand to take some rice, roll it into a ball and eat.
•    Laarb is a salad, tossed and seasoned typically using chicken, pork, fish or duck with lime juice, fish sauce, ground rice and fresh herbs.
•    Kai Yang is grilled chicken served with som tam and sticky rice.
•    Sien Savanh is beef strips that are dried in the sun, simply a snack that goes well with the local beer. You can expect the beef to have been marinated in a mixture of ginger, fish sauce, garlic, black pepper, salt and sugar.
•    Kai Pen comes from Luang Prabang in the north. Kai is green algae gathered from the bottom of shallow rivers, dried and served in sheets with sesame seeds.
•    Khao Tom is a dessert of sticky rice in banana leaves using coconut milk and bananas. As a savoury dish the leaves would be filled with beans and pork.
•    Som Moo is a form of pork sausage tasting fairly sour.
•    Khanom Maw Kaeng is egg custard, soft and extremely sweet.
•    Fried Rice Ball Salad (Nam Kaow) includes lime juice, green onions and pork.
•    Kaow Paik (Laos Noodle Soup) should contain chicken, shallots and garlic.
•    Khao Jee is a baguette sandwich using a wide variety of ingredients, cheese or ham, tomato and lettuce, chili and onions typically.
•    Khao Poon is rice and vermicelli soup with meat and chili, shallots coriander, beans and mint.
•    Or Lam is ‘’jungle stew’’ made with buffalo or game and vegetables, beans, mushrooms and eggplants flavoured with chili.

On Laos travel packages, there will be many meals organised for you but there will also be plenty of chances to sample street food that is often found around local markets which are in themselves a treat for overseas visitors. Restaurants on the banks of the Mekong often have real atmosphere with fish being an obvious choice to sample.

When it comes to drinking, coffee is popular. It was introduced to Laos by the French and is grown on the Bolaven Plateau which often plays a part in Laos holiday itineraries. In the villages, you are likely to find locally fermented rice whisky and beer is popular everywhere.  Locals will be drinking green tea and it is often provided free in restaurants before, during and after the meal. Laos travel is a delight and there will be plenty of hospitality on show. Green tea may be a new experience and it is refreshing at all times. 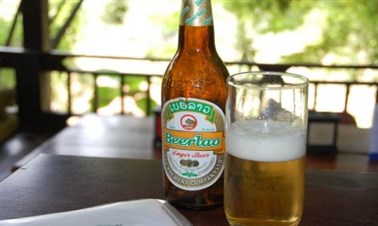