A very interesting site are the Myin Ma Hti Caves just to the east of Kalaw, on the Kalaw-Loikaw Highway about four miles as the crow flies from Kalaw as you approach Loikaw. It is a beautiful trip, and once over the pass, there are hillocks stretching into the distance as far as the eye can see. The caves are just over one thousand feet in length, lined by stalactites and natural formations on the walls that are known for their uncanny resemblance to life-like objects. Each formation has been named, with titles such as “headless human body structure,” “rock Brahmany duck,” “elephant tying pole”, and “Angel’s grinding stone.” There is another part of the cave known as “rock drums,” and where multiple protrusions of rock make different musical pitches, and “Angel’s Pond,” an always-full inner pond that collects water seeping from the wall is supposed to bring outer beauty and inner cleansing. The cave connects to another subterranean passage that exits out of a nearby hill, unlike other Burmese limestone caves that extend indefinitely underground. It is a quiet place, and with so much reverence and history, makes a fine place to trek out for some meditation practice.

Local legend suggests that the original pagoda at Myin Ma Hti was one of the 84,000 pagodas built by King Asoka 2,300 years ago. It was later repaired by the Burmese kings Anawrahta and Alaungsithu. The three htis of the pagoda may be a reference to these three great kings, although they may also have been placed by later donors. The earliest stupa is also believed to have been placed there by King Asoka, and many of the other Buddhas are from the Bagan Era. King Anawrahta himself donated the collection of twenty-eight statues you will find here, with fourteen on the lower level and fourteen on an upper terrace. The name of the large stupa is Ohn Na Lone Myway Shin Stupa. 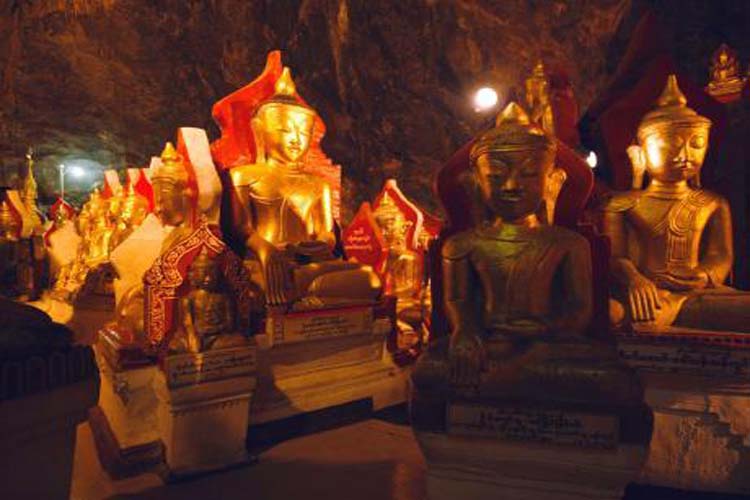