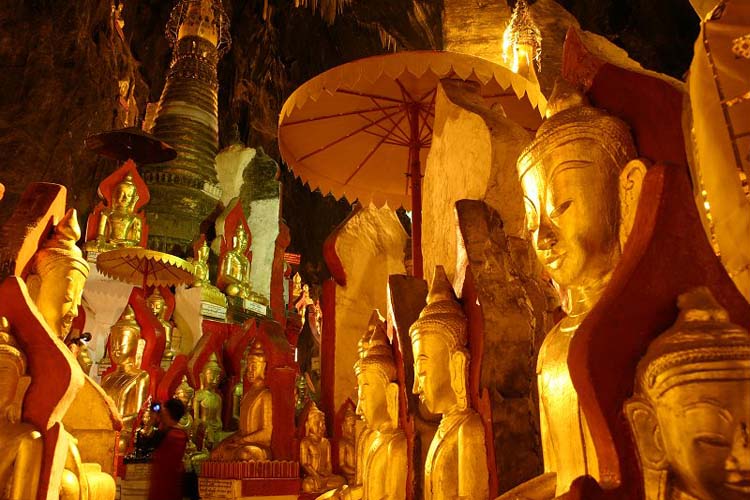 Buddha caves or Pindaya caves are considered as one of the most worth-to-see attractions in Myanmar. If you travel to Myanmar, Pindaya caves is an ideal destination for you.

The Pindaya Caves are set in the hills of Shan State near Pindaya, a small city with a spidery legend. It lies at 1164-m above sea level and is 40-km from Kalaw. Budda caves are noted for its extensive limestone caves and Shwe U Min Paya which is full of Buddha images of about 8000 Buddas and picturesque Boutaloke Lake. Of the three major caverns at Pindaya, only the southernmost cave is currently open to the public. It extends back into the hillside for about 500 feet or so. What makes it special is not the cave itself but the 8,000 or so images of Buddha enshrined there. They were placed in the cave during the late 18th and early 19th centuries in the main. It is perhaps the most consistent collection of Buddhist iconography during this period in the whole of Myanmar (Burma).

Pindaya itself is a centre for the Myanmar speaking Taung-yo people. The town's symbol is a spider. According to the legend,a  large (and possibly supernatural) spider lived in the local cave complex and somehow managed to capture a princess. A Prince Charming (whose actual name is lost to history but some claim it was Prince Khummbaya) was summoned to assist our fair princess. He entered the cave complex and at great personal risk killed the spider with a bow and arrow. When he bragged about his feats later, he said, “I have taken the spider,” from which the name Pindaya was taken.  The princess' ultimate fate is unknown.

The Pindaya caves are in limestone ridge overlooking the Pindaya lake and is full of thousands of Buddha images made from alabaster, teak, marble, brick, lacquer and cement which have been put there over centuries and arranged in such a way as to form a labyrinth throughout the various cave chambers. In these caves, you may come across lay people practicing meditation. The range of styles, shapes, sizes, etc. suggests that everyone from the elite to the peasantry has contributed to the gallery. It’s one of the only places where you can see images from the Bhisakkaguru tradition. There are 70 of them in the collection and while the Buddha images are distinctly different, if you aren’t a student of art, the easiest way to identify them is that there is a small seed in the Buddha’s right palm. It is a good place to begin short treks to surrounding Danu, Pa-O, Palaung and taung-yo villages.