Contact us | Travel inquiry
home / Myanmar
Things to do in Myanmar

Myanmar is a very unique country with a warm and friendly people and a rich heritage culture. Formerly closed to foreign tourists, Myanmar is starting to establish itself as a hotspot for a Southeast Asia cultural or adventure holiday.

Here are a few of the things to do on the Myanmar tour packages:

Inle Lake
Located in eastern Shan State, the scenic Inle Lake is well-known for its wetland ecosystem, floating vegetable gardens and stilt houses. This lake is approx 900 m about sea level and popular with native fishermen that make use of a very distinct "leg-rowing" technique. The lake is home to a variety of fauna and flora which has helped to transform this region into a UNESCO Biosphere Reserve.

There are plenty of guesthouse and hotels in the local area that can make this region of Myanmar a pleasant stay for a relaxing break. A two or three day stay is more than enough to appreciate the unique culture, cool mountain climate, and naturally-clean water and air.

A private tour on a local traditional boat makes it possible to explore the vibrant markets at the Indein and Maing Thauk water villages.

Hot-air ballooning
Hot-air ballooning over the arid Bagan plain makes it possible to get a bird’s eye view of the thousands of Buddhist monuments that scatter the landscape and date back to the 10th century.

Before the devastating earthquake in 1975 there was even more pagodas and temples in the local area. But, the remaining ancient structures are truly impressive and well worth an early morning ride over the city on the Myanmar family tour.

Cycle tour of Bagan
A relaxed cycle tour of the ancient city of Bagan makes it possible to explore this archaeological site at a preferred pace while poking around the 2000+ Buddhist monuments. A 3 or 4 day tour of the area is more than enough to see the major and many of the minor relics while travelling at a relatively-leisurely pace.

At the height of the Pagan kingdom’s height, there was an estimated 10000 Buddhist monasteries, pagodas and temples in the city, but this number slowly fell over the years.

The expansive green plains are mostly flat which makes them really easy to ride across on a hire bicycle – though when the weather is too hot it may benefit to hire an electric bike for the day.

Also, make sure to pick up a map to avoid getting lost and not seeing the highlights such as the Ananda Temple, which dates as far back as 1105 AD and built for King Kyanzittha. Other great attractions include: Gawdawpalin, Shwegugyi, Dhammayangyi and That Byin Nyu.

Alternatively, by hiring the services of an English-speaking guide it is possible to learn much more about the history of the temples while travelling through the ancient city.

This captivating archaeological site in Myanmar is regarded as the country’s equivalent to the Angkor Archeological Park in Cambodia.

Shwedagon Pagoda
One of the holiest sites to visit on the Myanmar tours is the Shwedagon Pagoda which is located in Yangon. It is acceptable to join Myanmar's Buddhists and enter the pagoda but it is important to be respectful and dress modestly. This includes removing footwear and wearing clothes that cover the knees and shoulders.

Shwedagon Pagoda is one of the world’s best known pagodas. It is estimated to be 2,500 years old; it has a 325-foot golden stupa, and is adorned with over 59500 pounds of gold leaf, as well as thousands of emeralds, rubies and diamonds.

Other attractions while in the old capital include its elaborate buildings and meeting the local people wearing the colourful longyis (sarongs). Plus, this is a great place to try the traditional dish of Shan noodles.

Also, the Shwesandaw Pagoda is a great place to visit in the evening to take in the stunning sunset. 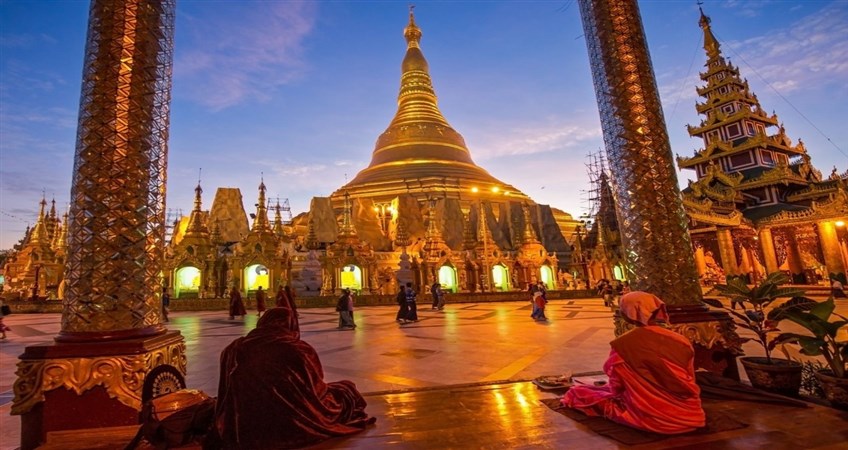 Pindaya Caves
A day trip to the Pindaya Caves is certain to give a unique experience on the tour of Myanmar with the chance to see nearly 8000 Buddha altars and statues sheltered in a mysterious cave system. This Buddha-filled cave is located in the hills of Shan State near Pindaya which is a relatively small city.

The Buddha images are in a variety of styles and sizes and come from different eras. From marble to jade and solid gold, each of the Buddha statues in the limestone caves has been offered in the hope of receiving harvesting blessings.

Also, while in Pindaya it is worth visiting the serene village of Pindaya which has a few shops and restaurants.

Sri Ksetra
Explore the country’s only UNESCO World Heritage-listed site at Sri Ksetra. Even though the archaeological site at Sri Ksetra doesn’t match the grand scale of Mrauk U or Bagan, it is still a very historic and cultural site to visit on the Myanmar holidays. A visit to the local museum makes is possible to see the artefacts that have been dug up in the local area and date between 500 and 900 AD. Also, for the more unique tour of the ancient city the tourist can take a ride on a bullock cart which takes about 2 hours to get around the city.

Pho Win Taung Hill
Pho Win Taung Hill is a labyrinth of caves that is approx 25 km west of Monywa. For the travellers on a road trip from Bagan to Mandalay, there are plenty of attractions to stop at that are off-the-beaten track including Pho Win Taung. This fascinating cave complex is filled with well-preserved and ancient Buddha statues, frescoes, and murals.

There is a 20 minute walk to reach the top of the hill and on reaching the summit there are nearly 900 caves to explore with not only the statues, but also the murals that date as far back as the 14th to 18th centuries and represent Jataka stories and Burmese life.

This region of Myanmar is believed to house the richest collection of Buddhist images and mural paintings in South East Asia.