10 Horrible Dishes to Try in Vietnam

Vietnamese cuisine has spread to other parts of the world over the years. It is just one of a number of Asian cuisines that have attracted diners in different parts of the world. If you decide on a Vietnam tour, it is certain that a Vietnam travel agent will include the chance to sample local food wherever you go.

There are some wonderful dishes in Vietnamese cuisine. Pork and chicken are the main meats and fresh fish and shrimps regularly consumed. Vietnam has a variety of flavours to add to them while rice, vermicelli and local fruit and vegetables all help to make your food during your holiday as excellent experience, whether you eat in a restaurant or join the locals and buy street food.

It is important to remember in rural lie in many parts of the word, villagers seek their nourishment, protein etc., from wherever they can. They rarely some across processed food and produce most of what they eat.

Some Vietnam travel packages actually provide the chance to have a cookery lesson. There are many popular dishes that you will like but there are also some things that will be completely alien. If you want to try them, you only have to ask; it is up to you but here are a few things that you may think twice about.

Duck Eggs (Balut)
Eggs are common food throughout the world. In the west for example, people want fresh eggs which they will then boil, poach, fry or scramble. Eggs are used in many popular dishes. One delicacy in Vietnam is duck eggs but they are allowed to develop towards hatching before they are eaten. Only a short time before hatching with the duckling even having feathers, they are eaten with spices including garlic, salt, ginger and vegetables.

Shrimp Sauce
The locals made shrimp paste by allowing shrimps to ferment, adding salt and the resultant sauce is commonly used in Vietnamese cooking. Its smell is not good at all but the taste it adds to many dishes is regarded as essential.

Insemination
The use of blood is not exclusively Vietnamese. It is locally regarded as a tonic so a soup that uses blood with fish sauce and a range of meats and animal parts is a regular throughout Vietnam.

Dog Meat
It is arguably a matter of culture. Dog meat would never be considered in the West because dogs have traditionally been man’s best friend. In Asia, they are another source of meat and some believe it has beneficial medical benefits as well. It is naturally sour and salty and is eaten throughout the Country. If in doubt, you should ask what you are being served.

Mouse/Rat
There are some parts of Vietnam where this meat which comes from animals that elsewhere would be regarded as dirty vermin is eaten, especially during the Tet (New Year) holiday which is a major celebration lasting a number of days.
There are a number of dishes, perhaps as many as 30, that use this meat so once again, if you are squeamish you should ask exactly what is in front of you. It is rude to refuse food so think about things well in advance of sitting down to eat.

Snake
The climate of Vietnam is ideal for snakes and reptiles. They are a source of food in rural areas and locals will see that as completely natural. You can see how a chef prepares snake and the blood is also mixed with alcohol and drunk.

Lugworm or Sandworm
Similarly, the waters of Vietnam are full of fish. Several fish and seafood are familiar with overseas tourists but the principle of locals is that everything can be eaten. Fish that live in dirty and brackish waters are eaten, particularly up in the North. It is the rainy season when such fish appear. Cooks will grill, roast, fry or steam fish and serve it with rice, vermicelli, fresh vegetables etc., and a range of herbs and spices. They will tend to disguise the flavour of the fish so if you are going to try anything on this list, perhaps it is this? 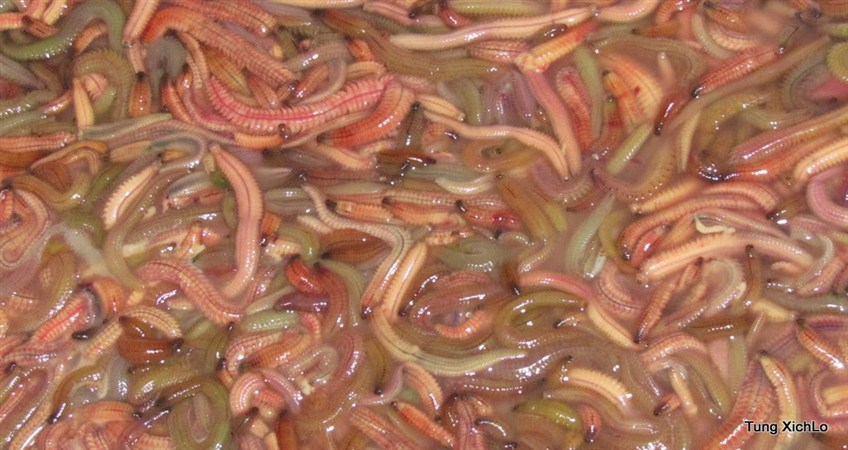 Worms
Worms are eaten in many parts of the world and Vietnam is one of the countries where they are common. It is as much the sight of them being cooked in a pot that will put you off eating them.

Organs
Offal is widely cooked and although it is always the cheapest part of any animal, most tourists will have eaten some form of offal. Offal was a way to feed a large family in many countries if money was short and inevitably, it is common throughout rural Vietnam; heart, stomach, brain, intestines, tail etc. In the animal world, prey is devoured completely, even the bones so there is no reason why humans cannot consume organs.

Pickled Wine
This medicinal wine is called Spirulina. It is made using animals and herbs soaked in distilled white spirit. It is seen as medicinal but it has also become part of Vietnamese cuisine. The main ingredients include raw, rather than cooked meat.

The Insect Family
Tourists on tour in Vietnam are likely to regard Insects much the same as worms. Birds and small animals survive on such things but they are not human food they may think. Well, things such as locusts, crickets, insect larvae, scorpions and ants are very much on the menu. They are a form of nutrition in a country where that can often be scarce in rural areas.

Now that you have read a list of some of the things that are eaten in Vietnam, what do you think? Certainly, some of them will never get the support of overseas travellers, even the most adventurous. But remember, they do not seem to have cause the Vietnamese harm.

The top 10 best dishes to eat on your Vietnam tour!

How to make traditional Vietnamese food on your vacation

When will Vietnam allow "Vaccine Visa"?