“Pearl Island” Phu Quoc is a large tropical island off the coast of Vietnam. It is the biggest one in the 22-island complex of Vietnam in the Gulf of Thailand, Kien Giang province. Its northeast cape is 4 sea miles from the neighbour Cambodia. The island is 62 sea miles east of Kien Giang capital (Rach Gia town), and 25 sea miles from Ha Tien town. Phu Quoc together with other 22 islands makes up an island district of 56,500 hectares in total area, which approximates that of Singapore island nation. Wheareas Phu Quoc itself has a total area of as much as 574 sq. km, in a triangular shape. Some author has compared the island to a swimming fish with its head turning to the North. Phu Quoc is ringed with some of most beautiful beaches and best seafood in Vietnam, promising quite a few absorptive elements for tourists.
Climate

Phu Quoc is featured with a monsoon tropical climate (hot, wet and rainy), but its special location in Gulf of Thailand minimizes natural calamities. It has two seasons, dry season from December to May, and rainy season from June to November. The former is affected by Northeast monsoon with an average humidity of 78%, temperature goes up to 35oC as the highest in April and May. In rainy season, the island acts as the gateway to West-South West monsoon. The annual average rainfall is around 3,000 mm.

How to get there

Another option is going by speed boat from Rach Gia to Phu Quoc or Ha Tien to Phu Quoc.

Phu Quoc is considered a famous national tourism zone of Vietnam. The island’s beautiful beaches have been voted to be "The Cleanest and Most Beautiful Beaches of the World" by ABC News ever since the end of February, 2008.

Coming here, tourists are lured away from their busy daily life. Phu Quoc National Park should be on top of the visiting places. Here is covered with a plentiful fresh & green floristic composition and natural resources of jungle & sea. Thanks to the tropical favorable climate, Phu Quoc is of great potential for ecological tourism development. Try to get out on a boat in the evening for some squid fishing yourself, or make a visit to Phu Quoc National Park and swim in a quiet pool! This will be very relaxing!

Pristine beaches here are seemingly captivating to those fond of unspoilt beauties. The one listed in the “World Hidden Beaches” is “Long Bank” (“Bãi Dài”), which is most beautiful from October to March. The beach honorably ranks higher in the list to many other world famous beaches, such as Wildcat Beach in California, the USA, Pink Beach in Barbuda, or Cayo Costa State, south Florida, and so forth.

Besides, other suggested beaches to visit are Kem Bank, Dam Bank, Sao Bank, Ong Doi Cape, and so forth. You can come here by ship or airplane (Hochiminh City – Phu Quoc Flight). Swimming, sun bathing, boat-sailing, scuba-diving, etc. are all the exciting and relaxing seaside activities, healthful for every individual tourist. Try SCUBA diving: the shallow waters (max deep to 12-16m) allow even unexperienced divers to have nice dives. There is some nice coral to see and if you are lucky you might see a bamboo shark. After about an hour dipping yourself in the cool and clean blue sea water, imagine that you are now served with a series of specially tasty seafood, you would feel like you were the happiest guy in the world!

In case one has interest in the local fishing life, he may pay a visit to Ham Ninh fishing village, where the routine daily fishing work of the locals are available at your observation. 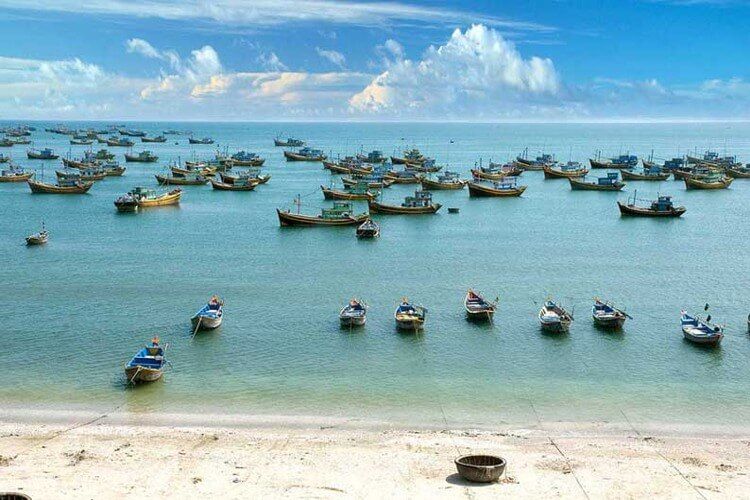