Overview
There is always somewhere new to find in a country as large as Vietnam. Its 3.400 kilometres of coastal made it almost certain that new coastal destinations would be found offering great beaches and a crystal clear blue sea; enter Ly Son, an island district in Quang Ngai Province in South Central Vietnam. It is reclaimed land that is now about 400 years old.

It is becoming famous for its onion and garlic production. Usually these are grown in river deltas but Ly Son seems to have the secret as well because its production is getting great reviews everywhere. Up to the mid-70s the production was small scale; each family growing for personal use. However one they were tasted on the mainland it soon became apparent that there would be demand for the onions and garlic across a wide region, even nationally because of the distinct flavour. Cultivation isn’t easy; it is the sand mixed into the soil that has made the difference but the sand had to be transported first. The crops are planted around September, watered regularly often twice a day and picked six months later.

The island is just 10 square kilometres with two small volcanic island just offshore. Fishing is the other main activity while tourism is just starting to develop. The island’s population is around 20,000 and our Ly Son travel guide expects them to become increasingly involved in tourism

How to get there
The main north –south rail and road systems go through the Province. There are plenty of bus services so Ly Son is not quite as remote as you might think. The nearest airport is Chu Lai just north of the province. Vietnam travel packages are likely to see Ly Son as a place for the future. If you are preparing your Vietnam travel itinerary think about a visit if you are planning to travel the length of the country. It will be a pleasant break. The high speed boat from the mainland takes just an hour. The local boat carrying goods is 2 hours.

Best time to visit
The rainy season, one of just two in a typical year, begins at the end of August with the maximum rainfall likely in September and October before the dry season starts in late January. Average winter temperatures are just below 20C while summer approaches 30C; it has been as hot as 40C. The best months on the beach are from June through July to August.

Things to see and do
The Tan Temple in An Hai has the largest of over 100 whale skeletons on the island. Whales are very important in this regions culture and religion. This skeleton is said to be over 200 years old.

There are plenty of temples and pagodas and any view from on high is simply stunning.
The major attraction however are the beaches and the lack of other people though Vietnam private tours will include the island on request because it does not involve much of a detour on a holiday in Vietnam covering all the country.

Every visitor will enjoy the tranquillity of the island and hopefully nothing changes that.

Accommodation
The island’s tourist industry is in its infancy and as yet there is little in the way of infrastructure. There are a few hotels and guesthouse while there may be local homes to rent.

Read more blog: All information you should know when traveling to Ly Son 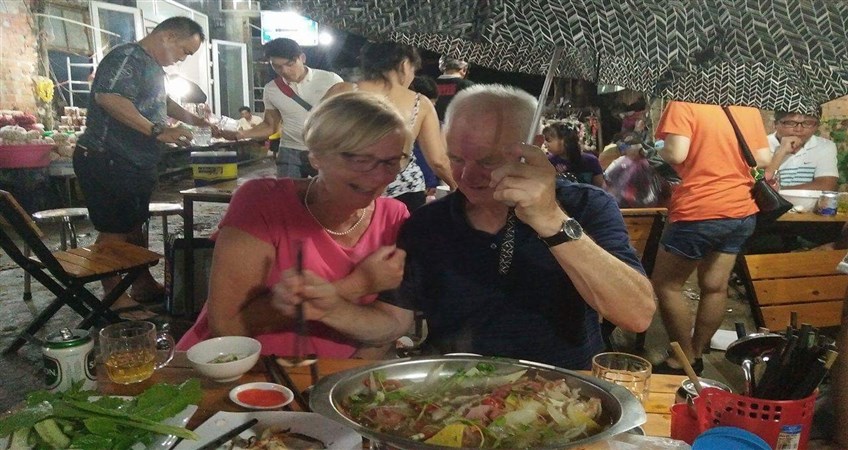 A visit to Ly Son island is a must. It may be small but there is much to see and do. A popular island for Vietnamese people to visit, its a little hidden gem for the rest of us.

Known mainly for growing small garlic and onions Ly Son also has a thriving fishing community and the most fantastic beaches.

Visit the Memorial house of Parcel team, the most amazing cave pagoda, An Hai village, Thoi Loi volcano and the lighthouse. Climb the steps to the top of the island behind the Lady Budha who protects the fishermen.  It’s the most wonderful feeling to be above her looking over the island and out to sea, absolutely superb vista.

One of the highlights of a visit has got to be a fantastic fish dinner. Join the locals at the night market, pick your own fish, take a seat enjoy a beer and  wait whilst its cooked and then just sit back  and enjoy the most delicious taste of fresh fresh fish.

Enjoy Ly Son now before the secret gets out and it starts getting crowded with tourists.

By Lyn and Barry from Koti in Warwickshire (UK)
Ask her about Ly Son island https://www.tripadvisor.com/members/bagshaw51