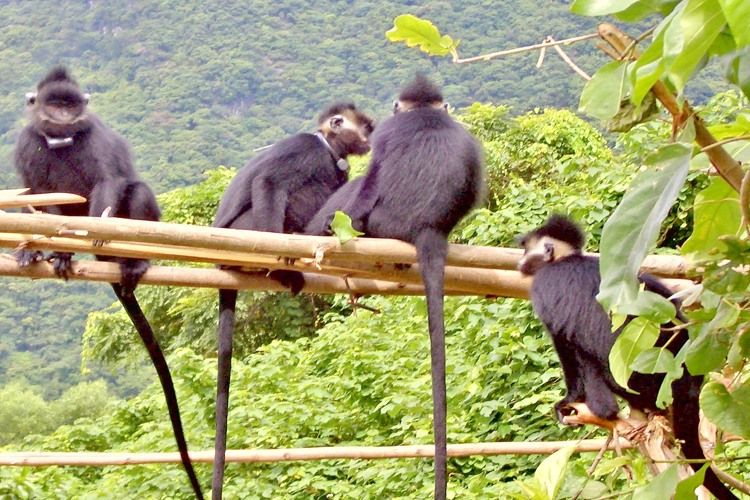 The Phong Nha-Ke Bang National Park, inscribed on the World Heritage List in 2003, covered 85,754 hectares. With this extension, the site covers a total surface area of 126,236 hectares (a 46 % increase) and shares a boundary with the Hin Namno Nature Reserve in the Peoples Democratic Republic of Laos. The Park’s landscape is formed by limestone plateaux and tropical forests. It features great geological diversity and offers spectacular phenomena, including a large number of caves and underground rivers. The site harbours a high level of biodiversity and many endemic species. The extension ensures a more coherent ecosystem while providing additional protection to the catchment areas that are of vital importance for the integrity of limestone landscapes.

Phong Nha-Ke Bang National Park is located in the middle of the Annamite Mountain Range in Quang Binh province, Viet Nam, and shares its boundary with the Hin Namno Nature Reserve in the Lao PDR to the west. The property comprises an area of 123,326 ha and contains terrestrial and aquatic habitats, primary and secondary forest, sites of natural regeneration, tropical dense forests and savanna and is rich in large, often spectacular and scientifically significant caves.

The property contains and protects over 104 km of caves and underground rivers making it one of the most outstanding limestone karst ecosystems in the world. The karst formation has evolved since the Palaeozoic period (some 400 million years ago) and as such is the oldest major karst area in Asia. Subject to massive tectonic changes, the karst landscape is extremely complex, comprising a series of rock types that are interbedded in complex ways and with many geomorphic features. The karst landscape is not only complex but also ancient, with high geodiversity and geomorphic features of considerable significance.

The karst formation process has led to the creation of not only underground rivers but also a variety of cave types including: dry caves, terraced caves, suspended caves, dendritic caves and intersecting caves. With a length of over 44.5 km the Phong Nha cave is the most famous of the system with tour boats able to penetrate inside to a distance of 1,500 m. The Son Doong Cave, first explored in 2009, is believed to contain the world’s largest cave passage in terms of diameter and continuity.

A large number of faunal and floral species occur within the property with over 800 vertebrate species recorded comprising 154 mammals, 117 reptiles, 58 amphibians, 314 birds and 170 fish. The property clearly has impressive levels of biodiversity within its intact forest cover, notwithstanding some gaps in knowledge of the population status of some species. .

Criterion (viii): Phong Nha-Ke Bang National Park is part of a larger dissected plateau, which encompasses the Phong Nha, Ke Bang and Hin Namno karsts. The limestone is not continuous and demonstrates complex interbedding with shales and sandstones. This has led to a particularly distinctive topography. The caves demonstrate a discrete sequence of events, leaving behind different levels of ancient abandoned passages; evidence of major changes in the routes of underground rivers; changes in the solutional regime; deposition and later re-solution of giant speleothems and unusual features such as sub-aerial stromatolites. On the surface, there is a striking series of natural landscapes, ranging from deeply dissected ranges and plateaux to an immense polje. There is evidence of at least one period of hydrothermal activity in the evolution of this ancient mature karst system. The Son Doong Cave, first explored in 2009, could contain the world’s largest cave passage in terms of diameter and continuity. The plateau is one of the finest and most distinctive examples of a complex karst landform in Southeast Asia and the property is of great importance for enhancing our understanding of the geologic, geomorphic and geo-chronological history of the region.

Criterion (ix): Phong Nha-Ke Bang National Park consists of a complex limestone landscape, which includes very large caves and underground rivers. The property includes karst formations which are some of the oldest and largest in Asia, and it has geological, climatic, hydrographic and ecological conditions which are distinct from other limestone karst landscapes. Its cave ecosystems and habitats are unique with high levels of endemism and adaptations displayed by cave-dependent species. The property constitutes one of the largest remaining areas of relatively intact moist forest on karst in Indochina, with a forest cover estimated to reach 94%, of which 84% is thought to be primary forest. Furthermore, the property protects globally significant ecosystems within the Northern Annamites Rainforests and Annamite Range Moist Forests priority ecoregions.

Criterion (x): A high level of biodiversity is found within the property, with over 2,700 species of vascular plants and over 800 vertebrate species. Several globally threatened species are also present: 133 plant species and 104 vertebrate species have been reported, including several large mammals such as the endangered Large-antlered Muntjac, Clouded Leopard, and the critically endangered Saola. The level of endemism is high, especially in the cave systems. Furthermore, it is estimated that over 400 plant species endemic to Viet Nam are found within the property, as well as 38 animal species endemic to the Annamite range. Several new species to science have recently been found, including cave scorpions, fish, lizards, snakes and turtles, and more species are likely to be discovered. Importantly, four threatened primate taxa endemic to the Annamites are found within the property: the Hatinh Langur (specialised in karst forest and endemic to Viet Nam and the People’s Democratic Republic of Lao), the black form of the Hatinh Langur, sometimes considered as a separate species, the Red-shanked Douc Langur, and the largest remaining population of White-cheeked Gibbon.

The property constitutes one of the largest protected karst landscapes in South East Asia. Covering an area of 123,326 ha and bounded to the west by the Lao People’s Democratic Republic, all elements necessary to manifest the outstanding geological values of the property of Phong Nha-Ke Bang National Park are contained within the boundaries of the property. The inscribed property is completely surrounded and protected by a buffer zone of 220,055 ha and is designated into three management zones: a strictly protected, an ecological restoration and an administrative/service zone. The watershed protection forests in the buffer zone also protect the integrity of the property. Furthermore, the extension of the property enhances its integrity and connectivity with the karst landscape in Lao PDR.

There are, however, a number of issues that affect the integrity of the property. Wildlife poaching and illegal harvesting of forest products are a direct threat to biodiversity values. The property has also suffered from past developments and its integrity could be threatened by further uncontrolled tourism developments, notably by the proposed construction of a cable car and access roads. There is a need for the implementation of Environmental Impact Assessments for any projects which could negatively affect the site. This would ensure that the natural landscape, geologic and geomorphic values, and key features such as primitive forest, caves, rivers and streams within the inscribed area remain intact. The property is situated within an area of high population density and as such a number of activities, such as cultivation, tourism, transport and freshwater fisheries could also impact on its integrity.

Originally designated as a Nature Reserve in 1986, Phong Nha-Ke Bang National Park was established in 2001 under the Decision 189/QD-TTg by the Prime Minister and is managed by a Management Board. The Management Board is responsible for protection of forest resources and biodiversity and was established in 1994. Cave conservation and the provision of a tourism service are the responsibility of the Cultural and Ecological Tourist Centre under the Management Board. The property is also included in the Special National Heritage List (2009), and the Special Use Forest system (1999). The National Park is effectively protected by a number of national laws and government decisions, which prohibit any action inside or outside the boundaries of the National Park or a World Heritage property that may have a significant impact on the heritage values.

A Strategic Management Plan has been in place since 2012 and is based on existing plans, including the Sustainable Tourism Development Plan, the National Park Operation Management Plan and the Buffer Zone Development Plan. The Management Board oversees law enforcement programmes including ranger patrols and joint law enforcement operations on the border with Lao PDR. Nevertheless, the rugged nature of the country and community dependence on natural resources coupled with relatively limited resources for enforcement means that wildlife poaching and illegal timber gathering are difficult to eradicate and remain a challenging issue.

The Ho Chi Minh highway, constructed outside and to the north of the property is appropriately located and provides important and valuable benefit to the National Park in terms of opening up views of and access to the Ke Bang forest area. However, other road construction and tourism development will require rigorous and comprehensive assessment of environmental impact before decisions are made on whether they should be permitted or not. It is paramount that such developments do not impact on the karst and biological values for which the property has been inscribed. Impacts of increased development pressure and tourism numbers will also require continual consideration, planning and management to ensure that these pressures do not damage the Outstanding Universal Value of the property. The property clearly has impressive levels of biodiversity within its intact forest cover, however, up-to-date data on large mammal species is also needed to confirm the population status of reported large mammals including tiger, Asiatic black bear, Asian elephant, giant muntjac, Asian wild dog, gaur and the recently discovered saola. 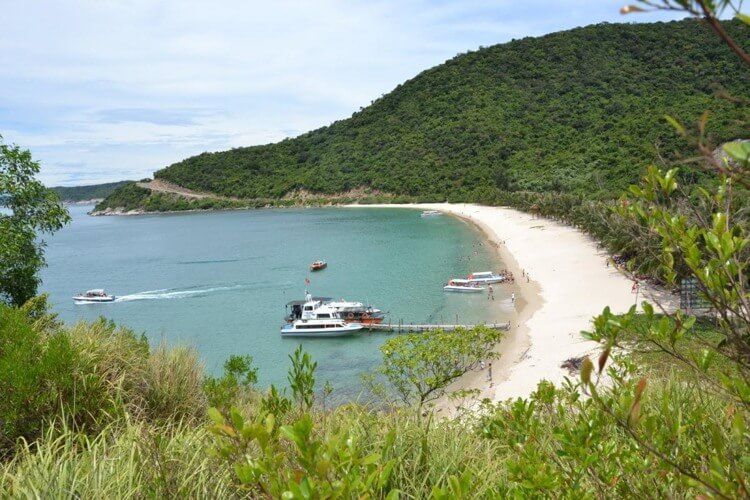 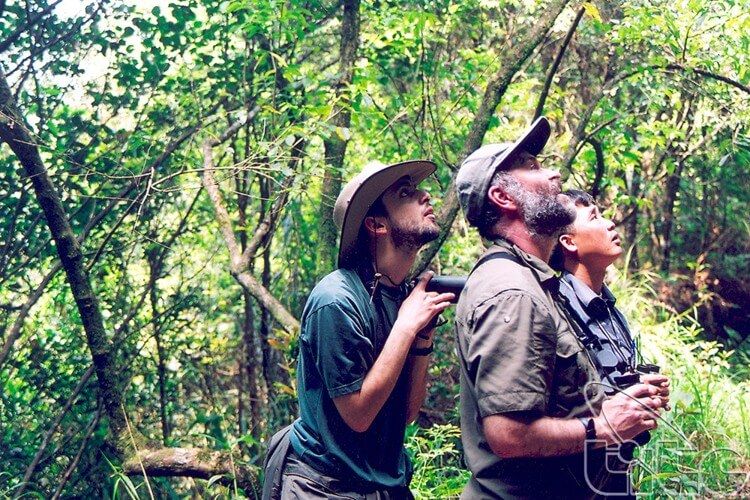