Costume in Vietnam is a great deal to do with colour. Some hill tribes are recognisable by colour alone. There are over 50 ethnic groups in Vietnam and their clothes often set them apart from other tribes. Vietnam tour packages will certainly take visitors into the Northern Highlands and it will soon be evident that there is a certain uniformity in what the tribes wear. Some will combine red with black, others blue and black or blue and white.

Western clothing has become common in the cities; Vietnam private tours will always include time in modern areas which could be anywhere in the world.

National Costume
Ao Dai is now regarded as the national costume of Vietnam, made of silk and occasionally worn by men as well. ‘’Ao’’ means shirt and ‘’Dai’’ means long. It is usually worn together with trousers. It has superseded other garments but occasionally, especially in the North some of those are worn on special occasion, notably Ao Tu Than, former peasant women attire made from plain fabric but extremely colourful as tourists on Vietnam holiday packages will see in the north.

18th century lords and mandarins in Hue tried to modernise and that included their clothes. The Nguyen Dynasty had insisted Vietnamese wore Chinese style clothing, tunics and trousers from the Ming Dynasty and it was seen as time for change. It was only in remote parts of the North amongst the hill tribes where skirts had survived.

One of the results was the Ao Dai, a long dress, which tourists on Vietnam travel packages are certain to see on the women in this ancient imperial capital.

It does not especially suit everyday work but at Tet it is evident everywhere. Ao Dai had been banned briefly after the unification of Vietnam but was revived and is common attire for school girls and office workers, generally in white.

Yem
This is a bodice worn mostly as an undergarment. It is of Chinese origin and has been modernised in recent times as it was being abandoned in favour of a bra. It has become fashionable as the equivalent of the halter worn by women in the west and hence is available in bright colours.

Áo tràng Phật tử
This is the robe that tourists on Vietnam holidays will see in Buddhist temples. They are often light blue or alternatively brown. The collar resembles that of the ao dai but it is sleeveless unlike the ao dai. The may be worn with or without matching trousers.

Non La (Conical Hat)
This hat dates back to the 13th Century and the Tran Dynasty. It is worn by both sexes and people of all ages. It is made from anything from dried leaves or bark to bamboo. It makes a great souvenir for those on a Vietnam holiday.

Summary
Western clothes have become fairly common in cities while more practical clothing has tended to replace traditional attire for those working in the fields or fishing. However national costume remains very important and is always there when a special occasion comes along. 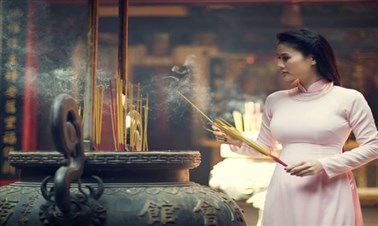 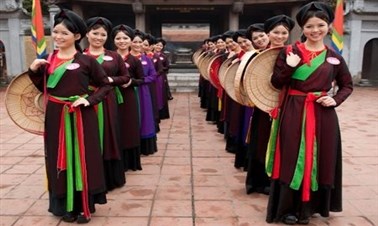